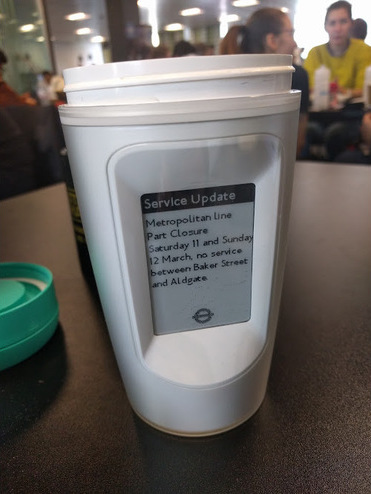 BrewTube is an app that uses the Paulig Muki smart coffee mug to fetch real-time service updates from Transport For London’s API. The app allows you to find your mug and specify a line to display updates from, sending the result to the Muki’s e-paper display.

Since I’m actually using this in my day-to-day life, I aim to make some improvements to this app. However, I have exams and won’t be using it this summer (won’t be in the city!), so don’t expect much progress until late August/September.

How I built it

The Paulig Muki mug is a commercially available coffee mug that I acquired from the 2016 edition of Junction, in Helsinki. I used Paulig’s Java library which exposed an API for their mug, and integrated this into a rather simple Android app. The app sends a HTTP request to TFL’s open API, which returns the status of the given line. With this, I then used Java’s built in drawing library to create a bitmap, which uses the TFL logo and their font, and sent this to the mug over Bluetooth.